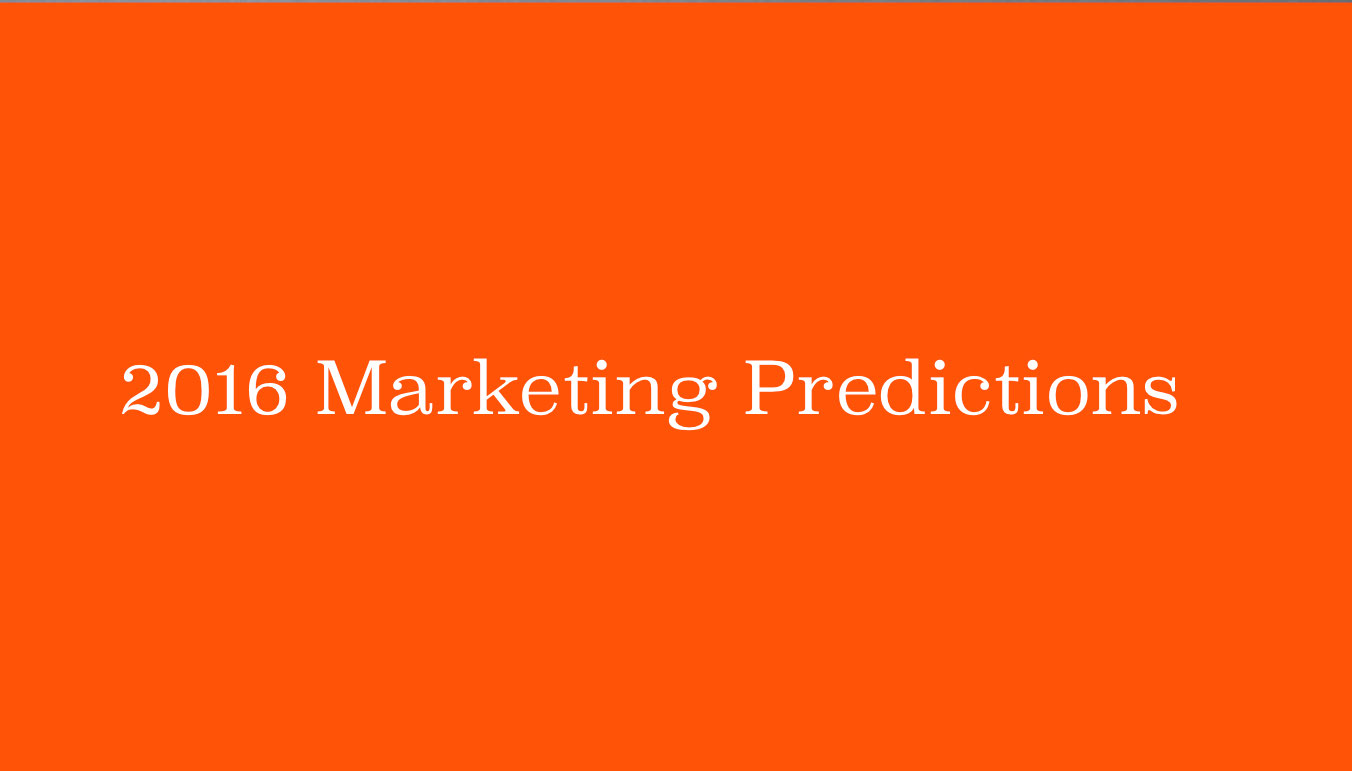 As a new year quickly approaches it’s time to recap the year that was, as well as make some bold predictions for 2016. Let’s face it folks, marketing is not an inexpensive proposition. Whether it’s time or money or both, it’s important to maximize the resources you have available and generate a reasonable return on that investment. The goal of this report is to point you in the right direction and provide options (not mandates) on where you can best focus your marketing efforts in 2016 and beyond.

New marketing channels and opportunities sprung up in 2015, most notably the live streaming platforms such as Periscope, Blab and Meerkat. Others, like 2014’s hotly anticipated social network, Ello, never quite reached mainstream adoption in 2015 like many expected. Google+ shifted the focus of their platform concentrating on niched “communities” and “collections”.

With so much changing so quickly, brands often take one of two approaches: Stand pat and wait to see what pans out, or jump right in to emerging platforms and see what sticks. I think there’s a much smarter and safer play however, and I’ll reveal that approach towards the end of this report.

Over the last month, I conducted a short, informal survey of entrepreneurs from various business circles I run in as well as via social media opening it up to business owners across the globe. I asked them four questions related to their marketing efforts. I’ve compiled some of the most interesting answers below and quoted them in italics.

Question #1: What marketing channels worked for you / gave you the most bang for your buck in 2015?

While answers were wide ranging, the majority of responses mentioned social media and/or in-person networking as their best performers. Here are some of the answers:

Facebook came up quite a bit here. I suspect the respondents were referring to organic Facebook marketing rather than paid, however. Here are some of the answers:

Question #3: What marketing channels will you focus on in 2016 and why?

Overwhelmingly, the live streaming platforms win out. Here are some selected answers:

My Own Bold 2016 Predictions

For me 2016 will be the year of engagement. What do I mean by that? I think brands will need to focus on mediums where they can directly begin a conversation and elicit a response from their customers and fans. Rather than putting static content into the world, there will be a shift in focus to making media that is engaging.

Take this article for example. Much of it was generated by users who participated in the process.That’s one way you can engage and interest an audience. I’ve done the same thing for my podcast. I let listeners choose the next subject. It ensures they’re getting what they want instead of me guessing what they want. It involves people emotionally in the process and helps me create content my followers want to hear. On my Blab.im and Periscope broadcasts, I have segments of the show dedicated to audience questions and input. It gets people excited to watch every week. I strongly believe that if you can figure out ways to engage your audience – take their order not just feed them – you’ll build a much bigger brand following in 2016.

So those are my broad observations and predictions for marketing in 2016. Now what to do with all that information? As I mentioned in the beginning, there are two approaches most entrepreneurs and brand managers take: diving into everything or waiting. My suggestion is that you take a different approach. I suggest you take the remainder of this year (2015) and build a profile of your target client. Then, find exactly where they’re hanging out. You might find Twitter is the best place, or you might find it’s LinkedIn. You might find they don’t engage in social media at all but they listen to radio. Whatever it is, don’t get caught up in what some guru tells you is the next best thing. Instead, do some research up front and find out where your customers hang out. Then focus 80% of your energy on that one platform. Yes one and only one! Then take the other 20% and try a few of these new ones mentioned above. Dabble around and see if anything sticks or if you can carve out a space.