Will work for tweets? This is becoming a hot trend in social media. It goes by many names such as “Flock to Unlock” and more but the premise is the same. The concept involves relying on social media interest (read fanboys) to generate buzz which unlocks a special reward. Basically it’s another form of gamification. But I’d argue a really, really bad use of it.

Most recently, the Avengers: Age of Ultron trailer can be unlocked by tweeting the hashtag: #AvengersAssemble. There is even a status bar to show how close the preview is to being unlocked.

So why is the form of buzz-building bad for business? Simple…it’s an obvious ploy. People know when they’re being had, and they generally don’t like it. I predict this trend is sure to be yesterday’s news very soon.

The best brands find ways to delight their customers. They find ways to serve them and make their lives easier or solve problems. This is pretty much the opposite of that. It’s asking the customer to tickle the ego of the brand. People don’t like that either. While it’s nicely masked, much like a Marvel character, it’s a bad brand strategy. It certainly doesn’t create new fans. At best, it makes your ultra hard core customer feel good about themselves…but they weren’t going anywhere anyways.

Apparently AdWeek agrees with me. 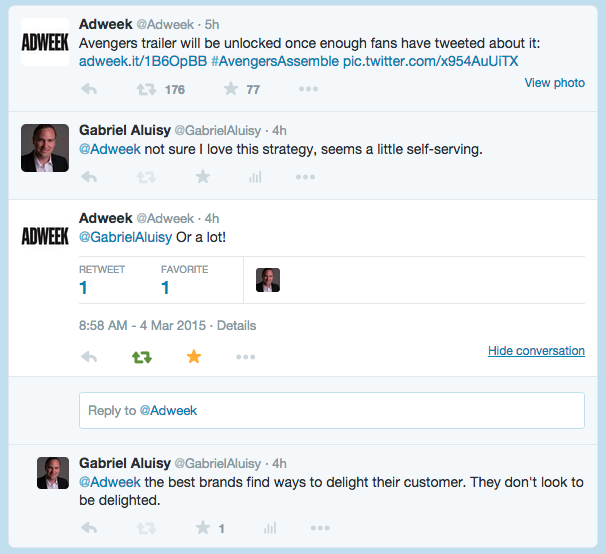