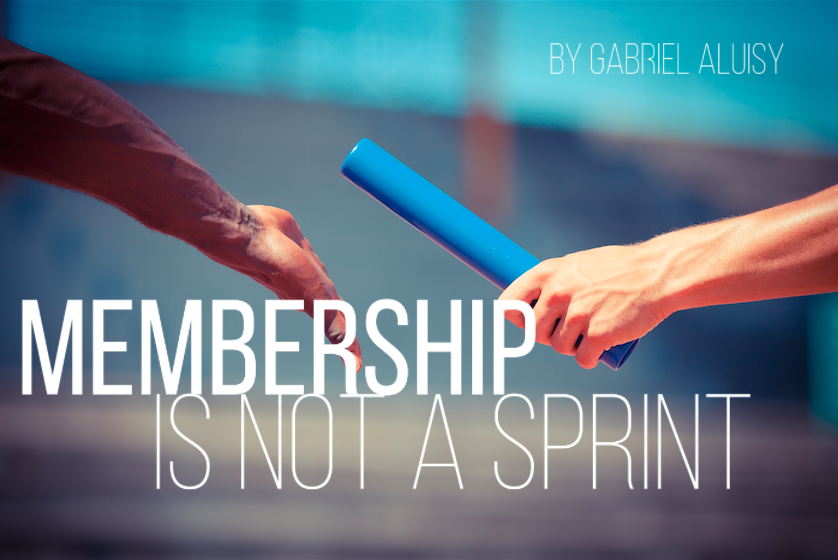 When it comes to private club membership, sales is not a sprint. Most people will agree with that simple and trite statement. You’ve probably heard it before from a board member or even a general manager. The problem is, the advice that comes next is often wrong too. The classic follow up to “it’s not a sprint,” is usually “it’s a marathon.” I’m going to show you why it’s not a marathon either. In fact, effective membership sales is actually a series of short sprints, more like a relay. Just like a relay, you need to have a strong team from beginning to end and you need to maximize every leg of the race.

The overwhelming majority of private club marketing directors I’ve met treat the sales process like a sprint. Here’s the classic scenario I’ve seen played out over and over. The prospective member is referred to the club or finds the club through some marketing channel. The membership director schedules a tour and in about an hour will briskly shuffle them from one area of the club to another. They’ll probably hop in a golf cart and see a few holes, stop by the pool or fitness facility, have a peak at the tennis courts, tour the dining rooms and banquet facilities and arrive back at the clubhouse and in the MD’s office. The prospect will then be handed some pamphlets about the club and talk numbers. The savvy membership director will ask for the sale because that’s what they’ve been trained to do at some point in their career. After all, good sales people ask for the close right?

The problem is, that tried and true membership sales process isn’t working like it used to. But why is it getting harder and harder to sell a private club membership? I’ve heard a number of theories posed from industry experts who talk about more competition, changing value systems, time-constraints, aging populations and so on. All of those have some truth to them. But I think there’s something right under our noses that’s even more important to recognize and it has to do with the methodology of how we’re selling.

A few month’s back I had the pleasure of speaking with Susan Greene, on my show, Private Club Radio. Susan is the current PCMA President and membership director at The Oaks Club near Sarasota, Florida. If you have the pleasure of meeting Susan, you’ll be instantly struck her bubbly personality and bright floral outfits. She’s a Florida gal after all. But beyond her famously welcoming personality lies a very sharp salesperson. She’s keenly aware of her market and the strengths and selling points of her offering. Suffice it to say, if she got you in a room for an hour she could sell you just about anything. However, instead of sharing her tips for getting a prospect to put pen to paper, she made a statement that caught me by surprise. “Your goal as a membership director shouldn’t be to make the sale, it should be to move the sale forward,” she told me.

I’d love to tell you how that line hit me, the clouds parted and the trumpets sounded. Except it didn’t happen that way at all. In fact, I said something mundane like, “Great advice, Susan,” and moved on to my next question in the interview. In the days and weeks that transpired I let that statement marinate though. I knew this simple truth had something profound behind it, but I didn’t know how it all fit in just yet. It took me talking to psychologists to figure out why it was so important.

Key Concepts for a Disruptive Idea

I regularly chat with psychologists. Not to clear my head or work through a deep seated issue, but to pick their brains on my marketing ideas. You see, I firmly believe if we can understand how our market thinks and how they will instinctively react, we can better position ourselves for optimal results. Who better than a psychologist to tell us what our prospects are thinking?

During one of these conversations I focused my questioning around creating desires. What does it take to create a desire in the mind of a consumer? The discussion naturally wove it’s way through a number of concepts, but eventually landed on the notion of habit formation. It made a lot of sense to me. We desire things for which we have built a habit. Conversely, habits can be built by associating experiences or things with a desirable outcome. It’s a simple concept and it was my first key.

It only takes a quick glance at modern technology success stories to realize why habit forming behavior is the holy grail for brands. The very mobile device in your pocket or purse right now is the best evidence I can present. Surveys have shown that nearly a third of folks would prefer to give up sex before they gave up their mobile device. Why is this? Because our phones have become our biggest habit. Everything that is contained in them has been designed with habit formation in mind. Every time you see a little red circle around one of your apps it is a trigger that leads to a behavior. You see the notification icon, you want to press the button, you get rewarded with something. Maybe it’s an important email, maybe it’s cute picture of your friend’s baby on Facebook, maybe it’s the next episode of that podcast you’re really into.

Nir Eyal’s brilliant book, Hooked: How to Build Habit Forming Products, explains the process of how habits are formed with our every day tech. It’s a four step process of triggers, actions, variable rewards and investment. Using our example above, that little icon on your phone’s screen is the trigger. That trigger causes the action of you opening the app. The reward is what you see or experience, it’s that cute picture of a baby. You’re then asked to make an investment, whether that’s filling out your profile, responding or leaving a comment, sharing something yourself, etc. Now, it’s critical to note that rewards must be variable for these habits to form otherwise the monotony would cause boredom and use would drop. If I just saw cute babies all the time, I’d get bored. I need to see links to informative articles, photos of my friends, or a funny video every once in a while to keep me guessing and keep me interested. Once this four step process is repeated a few times, habits get formed.

As the conversation progressed, I found the second key that would unlock Susan’s statement: habits take 30 days to form. A month’s worth of electrons firing and dopamine spreading and all that other good brain stuff causes those synapses to build and eventually a habit is made.

So armed with this knowledge on how habits are formed and how long they take, I once again contemplated the sage words of Susan Greene. As I alluded to earlier, the problem of private club membership isn’t the offer, it’s the process. It’s the way we’re going about trying to sell something. If we can think of the sales process as a 30 day habit-forming process, instead of that proverbial “three hour tour”, I think success will come more easily. Those close ratios will go up. You’ll turn more prospects into members. It’s science.

My challenge to boards, GM / COOs, and membership directors is to begin to treat the membership sales process as a relay race spread out over 30 days. Break that down into 4 weeks where you can get a prospect immersed in your club. Give those prospects variable rewards and let them begin to associate the time spent at your club with the “good times”. Get them in that habit.

In practice, this is a 40,000 foot view of how it might look. Week 1, prospects tour your facility and are introduced to key staff. Week 2, prospects are invited back to play a round of golf or hit some tennis balls or sail around your harbor so they see what it’s like to decompress after a tough day at work. Week 3, invite them to have a meal at the club so they can have a sensual experience that equates your club with delight. Week 4, invite them to one of your affinity groups, like a wine club, so they can interact with folks that they can see themselves relaxing with. All the while, it’s important for the membership director to follow up and make sure they are “moving the process forward,” as Susan so eloquently said. After those 30 days of experiencing what it might actually be like to be a member of your club, that prospect is going to be in a much better state of mind to pull the trigger. That’s the time to ask for the close. They’ll have built those neural pathways that associates your club with pleasurable moments. They’ll have made your club their habit!

This is a disruptive concept. This is outside the box. Some boards and management will be opposed to this idea. I understand that. But it takes something disruptive and scary to affect change. It’s going to take a mindset shift to turn the tide and revitalize this industry we all love. This isn’t the only answer, but I think it’s a strong one that will help many of your clubs out there. If it’s not right for yours, that’s ok too. Please keep searching and remember that it’s when we think we’ve got it all figured out that we’re in the most danger.

If you like what you’ve read, there are a number of action steps you can take right now: