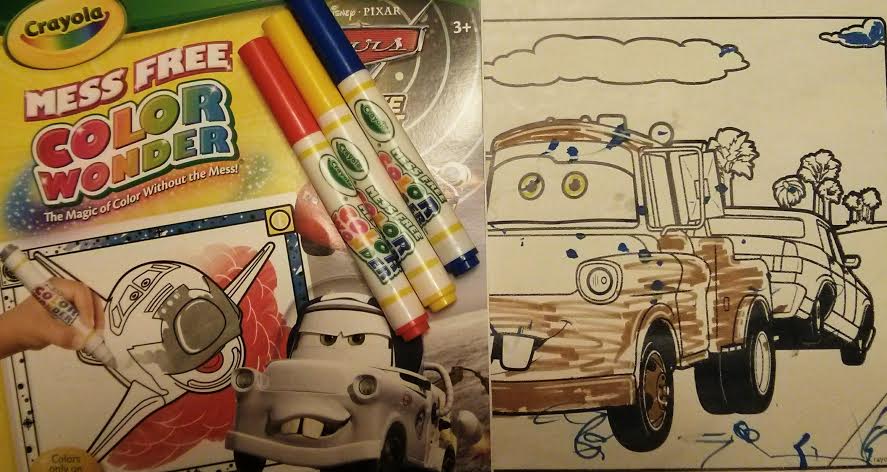 I have a 16 month old son. He’s a very independent little toddler. Like most his age, he is constantly picked up and taken places, fed what his mother and father decide to give him and he lives on a schedule that is predetermined for him by someone else. In short, he doesn’t get to make many choices.

My wife and I have been trying to get him to draw with crayons and pencils and generally  inspire his creativity – his “choice” making. Being creative is something he can control and, being so independent, we think he might really enjoy once he gets the hang of it. The problem with crayons and markers and pens is they are messy (especially in the hands of a 16 month old).

Cue the latest and greatest new product for parents: The Crayola Color Wonder marker! This ingenious invention is a marker that only writes on the special Color Wonder paper. That means no stains or smears on your carpet, furniture or walls anymore. Hooray! When we found out about it we had to get it. 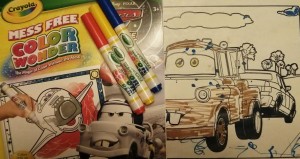 We popped into our local big box retailer and searched them out. Low and behold there was an entire rack of shelves dedicated to the markers and coloring books featuring characters from famous Disney movies and other television shows kids love. Obvious, but smart. We opted for a starter set that came with 5 colors and a small coloring book. It cost about $9 and we placed the package in our son’s hand and headed for the checkout. The package didn’t leave his hands for the entire drive home.

When we got home I opened it up for him right away. We turned to the first page of the coloring book and took out the blue marker. I noted its white tip was odd, but I figured once we put it to the special paper it would magically turn blue…and it did! Brilliant! Except for the fact that it takes about 3-4 seconds for the color to appear.

I handed the marker to my son. He quickly started stabbing and smearing it onto the paper as little toddlers do but nothing happened. Not for a while anyway. Not quick enough for him to notice. He stabbed at the paper a few more times and nothing happened. I intervened and took his hand in mine and drew some swirls on the paper, but it didn’t matter. They didn’t show up before he lost his attention. To be honest, I lost my attention too.

Now yes, this product does claim to be for children three years and up. I get that. But even three year olds want immediate gratification don’t they? I’m 33 and I sure do! What a major fail!

I see this type of  thing every day: businesses that don’t call or email their customers back for days and even weeks, delays in the delivery processes (both goods and services) and other general inefficiencies. That’s no way to run a business today.

I encourage you to find ways to run your business more efficiently. Are there ways you can cut down on delivery times? Is there a software system you can implement to better follow-up with your clients? Is there a process you can systemize to make your team faster?

You see, speed is the currency of the on-demand world. Focus on that first, and success will come (along with more loyal customers).